So now we’re at a point in the history of Game of Thrones where we can take a break from Westeros and explore some of the other parts of George R.R Martin’s universe.  Before we go on there is a quick correction.  I stated in previous posts that Aegon the Conqueror was born in Essos, the continent across the sea from Westeros.  It turns out that several very kind and helpful people have pointed out he was actually born on Dragonstone, a small island technically part of Westeros.  I was wrong and the internet was right.

Aegon’s lineage is interesting because while he was born in Westeros his family legacy places him firmly in the neighboring continent of Essos. 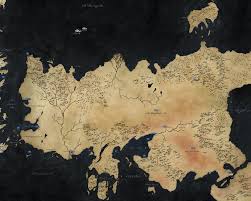 Now if you thought Westeros was big, Essos is even more massive.  Essos plays an important part in several key subplots of the books and show serving as the base of operations for Daenerys “I am a goddess among men because I have the last three dragons and I am drop dead gorgeous” Targaryen and as a nice and busy stopover for any character that needs to either run away from Westerosi political intrigue or hire someone to make their problems go away.  There are hundreds, if not thousands, of diverse and interesting ethnic groups and cultures to look at and observe and most excitingly (and welcoming considering I need at least six more weeks of material for this blog) it has a long and detailed history of mighty empires and great works of art, culture, and magic created while the First Men and Andals were still fighting in Westeros.  Starting with the slave masters of the Ghiscari Empire and ending with the Doom of Valyria and the beginnings of Aegon’s Conquest, we are going to spend the next couple of weeks talking about the pre history of Essos.

This blog post may seem strange and short since we’re simply laying the ground work for future posts but it just wouldn’t be complete without a historical comparison.  It’s been widely alluded to before, and you probably won’t be too shocked to hear this, but Essos is basically Continental Europe and Russia.

You can see the resemblance in shape and if we look at the history of Europe, especially everything east of Germany and around the Mediterranean Sea, there are quite a few similarities.  While the Celts still ruled Britain and the Saxons hadn’t arrived, the rest of Europe had already seen some of the greatest empires and civilizations known to world history rise and fall.  Starting with the Golden Age of Greece and ending with the Saxon invasion of Britain, we are going to compare the pre history of Essos to the long and detailed history of pre Medieval Continental Europe.