WARNING: THIS POST CONTAINS SPOILERS FROM SEASON 1 AND THE RED WEDDING.  YOU HAVE BEEN WARNED. 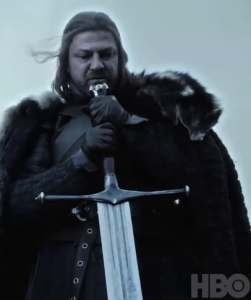 the books and show Valyrian Steel is a strange and almost mythical material that was created during the height of Valyrian power.  When Valyria fell, like all great empires usually do, the secret to making the material was lost and only a finite amount of the stuff remains.  The steel is remarkably light yet will cut through a man’s armor and weapons like a hot knife through butter so any sword made of Valyrian steel is basically the fantasy equivalent of a lightsaber.  As a result, any family who possesses a sword made of Valyrian Steel keeps it as a treasured heirloom and give the swords names like “Ice” or “Oathkeeper” and “Heartsbane”.  They are also so integral to each bearer’s honor and family that Tywin Lannister saw fit to melt the Stark’s Valyrian greatsword down into two swords as a giant middle finger to the Starks after the Red Wedding. 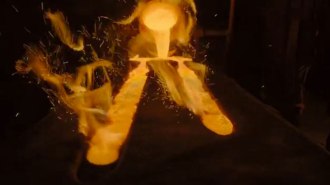 Two other features define Valyrian steel other than its rarity and deadly capability: It is extremely difficult to reforge, requiring an extremely skilled smith and techniques that are more similar to magic than science and it is also known for the intricate designs that seem to be woven into the metal itself. 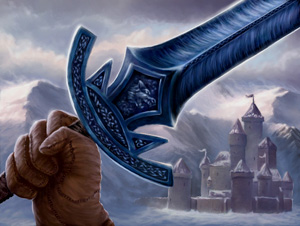 Happily everything described in the books and the show about this strange material can be traced back to a real world super metal that made legendary swords: Damascus Steel, also known as Wootz Steel. 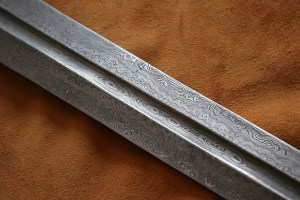 Our first record of Damascus steel comes from India where it is believed that it moved to the Middle East and into Europe around the 3rd century AD.  Like it’s Valyrian cousin, Damascus Steel was famous for its beautiful patterns engraved on the steel.  Also like Valyrian Steel, it was incredibly difficult to make and was renowned for making fine swords.

While there was no magic involved in making Damascus steel the forging process was incredibly complex and almost seemed like alchemy.  Without going into too much detail steel is essentially iron with a tiny bit of carbon mixed in.  A smith would take a lump of iron, add a high amount of carbon into the molten metal, and beat and reheat the metal until all but a tiny amount of carbon was left. 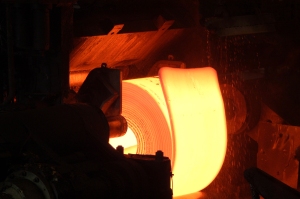 The trick was getting the right amount of carbon, too little carbon and the sword would be too soft to cut anything (not good when you’re fighting someone with armor) and too much carbon would leave the sword brittle and prone to shattering (REALLY not good in battle).  Somehow, the metallurgists responsible for Damascus Steel were able to make a metal that was both hard enough to cut well and soft enough to not break in battle while employing techniques that were similar to modern nanotechnology and haven’t been replicated for centuries (you can find out more, and the source of everything I just described here).  One of the most famous examples of this is the “Ulfberht” Sword. 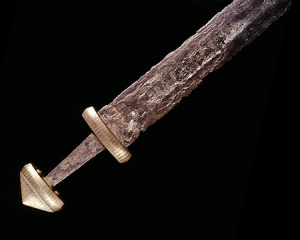 Not much is known about the sword’s origins except the name Ulfberht is stamped on the blade.  We don’t know if it’s the owner of the sword or if it’s the smith who made it but we do know that it was made of the same material, or at least something similar, as Damascus swords.  This was a prized luxury item that was only reserved for the very rich and powerful, say a lord or powerful king.  The Ulfberht sword would have been the real world equivalent of the Stark’s sword “Ice” and would have been something its owners would have cherished.

So there you have it, even the smallest details and materials from the books and show have potential historical similarities.  Tune in Wednesday when we return to form and start talking about the big ideas again.