Today we’re going to talk about one of the most mysterious and deadly groups of cutthroats and killers in the entire world of Game of Thrones: The Faceless Men.

Almost nothing is known about the Faceless Men due to their extreme secrecy.  What we do know through the show is that they are headquartered in Braavos at the House of Black and White

They were founded during the height of the Valyrian Empire by slaves who worked in Valyrian mines.

And they are very good at two things: killing people and disguising themselves to look like others.  It is made very clear in the books that their reputation is fearsome and with a big reputation comes a high price.  Also, they prefer to work from the shadows, coupling their ability to disguise themselves with a talent for making deaths look like “accidents”.  Nobody knows where this power comes from exactly but in might have something to do with the CAVERN OF FACES THEY HAVE HIDDEN IN THEIR HEADQUARTERS!

One thing’s for sure.  Whether they get their power from some unknown magic or the presumed centuries of experience they have had killing people the Faceless Men are the deadliest weapons in the world and you do not one after you.

The Faceless Men are tricky to pin down as an actual historical group since it would make sense that any organization that depended on this level of secrecy would very much like to have their name removed from the history books.  That being said there is an actual group of deadly warriors that does share some similarities with the Faceless Men: the Hashashin or more commonly known as “The order of Assassins”. 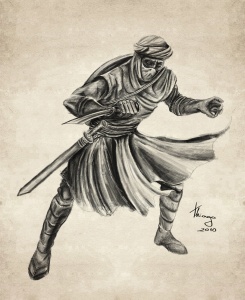 Unlike the Faceless Men the Hashashen were not mercenaries for hire.  Instead they were an Islamic religious sect known as the Nizari Isma’ili, a splinter group of predominately Shia muslims who preached a belief in reason, cooperation, and social justice.  The politics and logistics of Muslim religious orders and countless breakaways are far too complicated for this article but for now all that you need to know is that the Nizari were in a position that required a small number of followers to fight off a much larger enemy force, which resulted in the foundation of the Order of Assassins.  While not much is known about their exact foundation (see the need for secrecy above) it is widely believed that a man named Hassan i Sabbah founded the order in the 11th century.

Sabbah was an extremely charismatic leader who ran his new order of warriors out of the captured mountain fortress of Alamut in northern Iran.

Here Sabbah trained his followers to become some of the deadliest and secretive fighters in the known world.   His fighters were known to throw themselves into a battle with little to no regard for their own lives, appear from nowhere, and utilize tactics that had more in common with modern terrorist organizations such as Hamas or al-Qaeda.  Despite these brutal tactics they worked and the Nizari were left alone until they were finally beaten after the Mongols came in and laid the Middle East to waste.

A quick note on the word “assassin”.  The exact origin of the word is debated but it is believed that the Nizari’s enemies claimed that each soldier would consume a drug called hashish in order to get into a killing frenzy.  Members of the order were therefore called “hashashin” which would eventually become the modern westernized “assassin”.

No matter what their exact origin the Order of Assassins left a trail of bodies and blood that inspired tremendous fear, so much fear that they are still remembered in stories and books to this day.