While most of the sci fi television landscape is dominated by joint Canadian and American shows for tax reasons (and the same reason why almost every single planet in these shows looks like the same patch of British Colombian forest) Farscape was a joint American and Australian show that ran for four season from 1999-2003.  The show was written and run by the future creator of the current Sci Fi channel show DEFIANCE Rocke S. O’Bannon and has developed something of a cult following over the past decade.

being flung into a distant part of the universe via wormhole.  After being dropped in the middle of a alien spaceship dogfight he finds himself aboard a living ship that was transporting a group of prisoners which include a Luxon warrior named Dargo.

A renegade priestess, who is also a living plant, named Zhaan.

A small, fat slug like creature named Rygel who needs a hover chair to get around and was once the ruler of over 600 billion people.

And one of their former jailers.  A mysteriously humanoid soldier from a race of menacing soldiers called Peackeepers (because with a name like that what else could you be other than a militaristic warrior society dedicated to using violence in the name of order?) named Aeryn Sun.

And the ship itself, a biological organism known as Moya who is controlled by her Pilot, a creature grafted into Moya’s systems in order to help her function and navigate the stars. 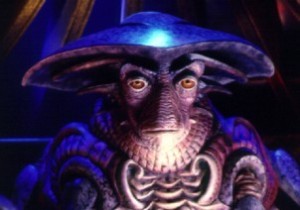 And that’s the main cast.  There were several other characters that joined the crew as some of the original cast left but the show followed the ship and its crew as they wandered the galaxy and searched for a way home all while dodging Peacekeepers and trying to stay out of trouble.

This is my favorite show for two reasons.  First, you may notice that Pilot and Rygel look like they’re puppets.  That’s because they are.  Farscape was produced by Hallmark and Jim Henson Productions, the same guys who helped bring the Muppets to life.  As a result all of the prosthetic body work and puppetry was done by a company that knew what they were doing and really cared about their work.  This resulted in creatures like this. 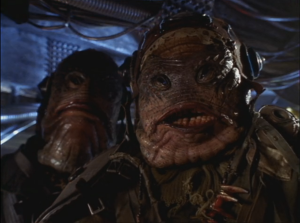 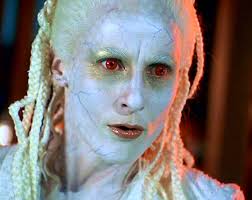 Sure some of the designs looked freaking and were occasionally clunky but in an age where real visual effects were becoming a rarity (this was the early 2000’s, CGI was king) this level of creativity and dedication deserves a lot of respect.

The second thing I love about this show is the sheer imagination it had.  Instead of having everyone speak the universal language of English and just have the audience accept it, Farscape said “no, we’re going to have each of the characters injected with translator microbes and give a plausible explanation as to why everyone speaks English”.  They were also the first show in my memory to not only treat the concept of a “living ship” as a gimmick but as a fully developed character as well.

Over the course of the show Moya displays signs of love, loss, anger, and even depression and if she’s upset you can bet the crew will feel it.  They even wrote a plot line where Moya gives birth to a baby (it turns out to be a berserk hybrid warship baby but to go on would spoil a huge part of the story).

Oh, and for any fans of the new Battlestar Galactica series, you know how they replace the word “fuck” with “frack” in order to circumvent censors?  Guess who did that first?

Bear in mind I’m just scratching the surface of what Farscape did, I didn’t even get to the interdimentional vampires or the time Crichton got turned into a statue because he was a genetic match for an alien princess, but you get the idea.  That being said the show was not without its problems.  The show was so full of creative ideas and creatures that it tended to wander about, what was originally a group of fugitives trying to get home turned into an inter galactic manhunt for something in Crichton’s head that would help the Peacekeepers win a massive war and it just got silly after a while.  Also some of the dialogue is incredibly campy and weird but it was the early 2000’s where that sort of thing was understandable.

Still, the show’s faults and foibles were few in comparison to it’s many strengths.  Farscape is an awesome show that deserves a look if you have chance.  It’s on Netfilx instant if that’s your thing and there is talk of a movie coming in the not too distant future.  Whether you’re a fan or not we can all appreciate the genius and imagination the show brought to television.

3 thoughts on “The Primordial Soup: The most interesting sci fi show you’ve probably never heard of”