Today we’re going to talk about one of the most violent and politically sensitive areas in the Game of Thrones universe, a place where history and modern culture collide and anything can be yours for a price: The Free Cities.

The Free Cities are the various former colonies, cast offs, and trading posts of the Valyrian Empire and each of them either owe their existence to the Valyrians or in the case of cities like Braavos, sprang into existence because of Valyrian culture and policy.  After the Doom of Valyria the cities became dogs without a master and began to fight among themselves to see who would take the place of the former empire.  Of all the cities Volantis had one of the stronger claims since it was one of the first and oldest Valyrian colonies but the city’s efforts to rebuild the empire were foiled when they were unable to convince the Targaryens to join them.  After the initial fighting died down a bit, and after the invasion of Khal Temmo was beaten back by a band of Unsullied each of the cities realized that the Empire wasn’t coming back and settled into a pattern of trade, commerce, bickering over smaller plots of land, utilizing small armies of paid mercenaries to settle disputes, and paying off the Dothraki every now and then to prevent each city from being sacked.  While the Free Cities are no longer the dominant political power in the Game of Thrones universe their trade and occasional disputes make them an important part of the cultural and political landscape.

We’ve talked about the Doom of Valyria before in this series of articles and how it was remarkably similar to the series of migrations, invasions, and looting that causes the end of the Roman Empire. 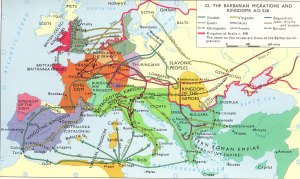 This is important because after the fall of Rome the Italian Peninsula would wind up being divided in a fashion similar to the Free Cities of Game of Thrones.

We’ll get into the details and specific politics of the Italian city states later (heck, we could have run an entire season’s worth of articles on the Free Cities and their historical counter parts if we wanted to) but for now all we need to understand is this: the fall of Rome as a central power destabilized the entire region and turned what was once a single empire into a squabbling collection of city states.

That’s not to say each of the states were completely powerless.  The Papal States became the center of Christian Europe while cities like Venice and Florence became economic powerhouses but the fact remained that Italy, like its fictional counterpart in the Free Cities, was divided into weakened tiny city states that still have an impact on politics to this day.

One thought on “History and Legends of Game of Thrones: an Introduction to the Free Cities”