Today, for our second post talking about crowdfunded comics that deserve more attention we are going to talk about a company that is bringing the massive, complex, and epic mythology of the Indian subcontinent to comic books and in order to help they have launched a Patreon campaign to bring one of their creations to life.

Link to the campaign: https://www.patreon.com/Devi?ty=h

The company running the Patreon campaign is called Graphic India.  It is a new company dedicated to bringing the history and mythology of India into the mainstream.  To that end they are already well into production of a web series called “18 Days”, a retelling of the great epic the Mahabharata and it is written by none other than Grant Morrison (for those who don’t know Grant Morrison one of the best comic book writers alive today), you can find out about that here.

The Patreon campaign is for Graphic India’s second major undertaking, a weekly motion comic web series called Devi.  Written by film director Shekhar Kapur the story follows the adventures of Devi, a mystical avatar of the Hindu gods as she does battle with an evil demon named Lord Bala.  Devi is set in a futuristic Indian city called Sitapur and looks like this.

Aside from looking like she can rip any opponent the shreds the story itself looks incredibly promising.  Sitapur is a futuristic Asian city filled with high buildings, low morals, and a blend of magic and technology that creates something new and different.  Also, the trailer is awesome.

Besides looking amazing and promising a story with the kind of blood and violence I like Devi, and Graphic India’s other projects, is bringing new ideas and new traditions to comic books that make all kinds of excited.

A little bit of history, comic books are known for adapting and reworking existing mythologies and stories into the present day.  Greek and Roman mythology was especially popular in the early days of comic books and DC is known primarily for utilizing it for some of it’s biggest stars.

While Marvel turned to Norse mythology for its mythical heroes and created this guy.

It seems to me that Graphic India is looking to give Indian mythology the same treatment, and when you have stories of monkey kings

And humans of immense strength battling giants with fallen trees. 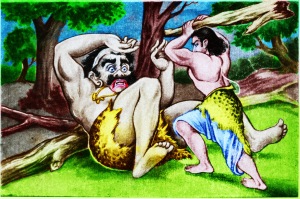 You have the makings of an amazing comic book universe with plenty of amazing and epic stories.

Devi is currently being developed as a weekly motion comic series and they’re already six episodes in.  The Patreon campaign was launched to help with the cost of creating the videos and you can contribute on a per creation basis, meaning you pledge for each video produced.  So if you want to expand your horizons with an epic story, awesome characters, and usher in a new mythology into the pantheon of comic book myth, consider donating today.