Quickly, without thinking name the first patriotic superhero.  This is what you were thinking right?

Yes if the Golden Age of superheroes is known for one thing it’s the fact that most of it took place during a little world event known as World War 2.  America’s superheroes rose the occasion and so many of them took on Hitler and the other Axis powers that if they had all been real then we would have won the war in no time. 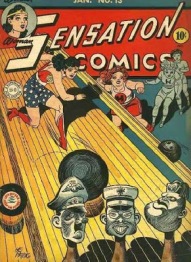 But believe it or not there was another patriotic hero, one who wasn’t afraid to buck tradition or assumed gender roles that the 1940’s had placed on American culture, one who used her incredible strength and invulnerability to not only help America beat back the Axis powers but to open a unholy beat down on American officials who she deemed corrupt and incapable of doing their jobs: Miss Victory. 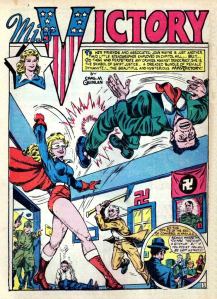 Miss Victory debuted as a side story in Captain Fearless #1 in August, 1941.  In keeping with wartime comic tradition it shows someone beating Nazis to pulp.

It should be noted that she predates Wonder Woman by about four months making her one of the first super heroines in comics, although not the first.   In terms of origin Miss Victory doesn’t have one, she just appears in the comic and it is simply assumed she has super strength and invulnerability (hey, it was a simpler time back than). 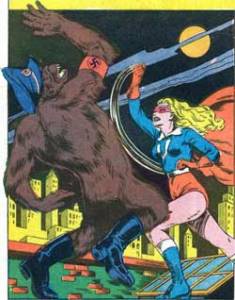 Her real name was Joan Wayne, a stenographer (fancy word for someone who writes down conversations) working for the government.  However, instead of simply contenting herself with beating back Hitler, Mussolini, and Tojo she decided that it wasn’t enough and turned her attention towards corrupt and deceitful American politicians and law makers (corruption and lies in American government? THAT’S never a problem)  and holy hell was she dedicated to her work. 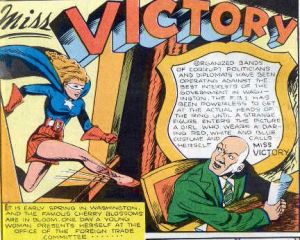 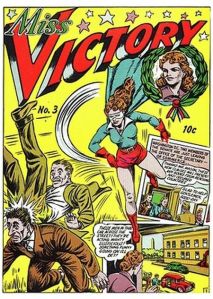 Yes Miss Victory wasn’t just a Nazi hunter, she was also a champion of social justice.  As a quick side note, social commentary is another thing that the Golden Age of superheroes was known for.  Superman’s first appearance had him save a man from Death Row, stop a wife beater, and tackle political corruption, it’s just that it quickly took a back seat to Nazi punching.

Miss Victory continued to star in her own short stories in the back of Captain Fearless comics until the comic was discontinued in 1946.  Post war America had little use for patriotic themed heroes and her publisher, Helnit Publishing, had been bought by Holyoke Publishing (it should be noted that Holyoke was no shrinking violet publishing house.  They are responsible for the creation of the Blue Beetle and one of their original artists, Carmine Infantino, was instrumental in creating the modern day Flash) and she was cut to save money.

However, Miss Victory had a much longer career than most of the Golden Age gems we’ve talked about and she would eventually have something even rarer: a resurrection.

In 1984 writer Bill Black and artist Mark Heike resurrected Miss Victory and gave her a new team, the Femforce, which was one of the first all female superhero groups ever created.  The comic was published by AC comics, a company that was founded in 1969 and made a name for itself bringing Golden Age superheroes into the modern era.  Her look was updated.

and she was given a back story.  In this version she was still alive for WW2 but secretly developed a serum called V-47 to help boost the strength and endurance of American troops.  Sadly, it only worked for her but thanks to the serum she now had super strength, invulnerability, and radically slowed aging which explains why someone who is over 70 years old can look like that.

Now you may be wondering where this particular title went.  The answer is that it’s still going.  AC Comics is still around and you can actually purchase recent Femforce comics on their website.  It just goes to show that when you have a staunch defender of liberty and freedom like Miss Victory it’s almost impossible to make it go away.