So it’s Friday and instead of being at Comic Con or having somebody else’s cool work to show you (if you are interested in showing off your written work or art work feel free to hit us up @cambriancomics and we’ll take a look) I’m going to do what seems to be par for the course on the Internet these days and share with you my favorite comic book series in a list based format.  Over the next couple of weeks I am going to countdown my top 5 favorite comic book series and explain why I like them.

First the usual disclaimers: This list reflects my opinion only if you see something you don’t like please keep it to yourself or leave a nicely worded comment on the site or on Twitter.  All work belongs to their respective owners.

DMZ is what happens when speculative science fiction meets really good and really personal dramatic writing.  The comic is set in the not too distant future where a post 9/11 American government has over extended itself in its War on Terror and has ignored too many pressing domestic issues.  Furious at Washington for spending far too much blood and treasure a large group of dissidents in the American Midwest form a new government dubbed the “Free States” and the second American Civil War begins.

The comic takes place after the Free State armies halt their successful advance at Manhattan, unable to take the island with the American military on the other side of the river unwilling to engage.  A stalemate develops with Manhattan being declared a Demilitarized Zone, stranding over 400,000 people on the island between the two opposing armies.

Into this potential powder keg comes a young reporter named Matty Roth who must navigate armed gangs, corrupt public officials, and a very tense political situation to learn all he can about life in the DMZ and manage to survive with his life and freedom intact.

This is one of those once in a generation comic books, a story that captures the moment it was written and manages to act as a warning to possible future events without sounding too preachy.  Writer Brain Wood manages to accomplish two things.  First, he manages to shed a glaring spotlight on current geopolitical affairs through his storytelling.  It may seem a bit of a stretch to see America torn in half with two equally unpleasant factions vying for control

and to see America littered with bombed out buildings, suicide bombers, and military checkpoints,

But this sort of thing is happening today, just not in America.

Also, while Wood does a fantastic job at showing the grand political and military game being played he also makes the story deeply personal and intimate.  When Matty Roth crash lands into war torn Manhattan he doesn’t find a collection of savages living off of rats and wallpaper paste, he finds normal sane people going about their daily lives and trying to adjust to the situation around them.

It’s not just gangs and psychopaths stalking the streets of New York (although there are plenty of those around) it’s a community filled with art, culture, and pride in who they are and where they are from. 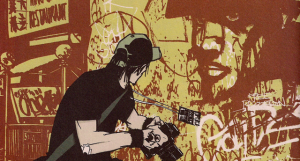 Amid the ashes, grime, and horror of warfare these 400,000 refugees manage to create their own home and distinct identity, which brings me to the artwork.

Holy crap the artwork is some of the best I’ve ever seen.  Normally I’m not much of an art hound, I prefer comics that favor a good story over art (I may be slightly biased since I can’t draw worth a damn) but I do believe that comic art is at its best when it compliments the story it tells.  Riccardo Burchielli is the perfect artist for this project.

His style is very dark and blocky creating an aggressive and intimidating look that stays with you for a while, a style that is very good at displaying both the weariness that comes with warfare and the inhuman savagery of those who are fighting it.  He’s also very good at drawing lots of tiny little details in both settings and characters which is fantastic for the countless pouches and modifications you can see on the clothing and uniforms and the destruction of the bombed out hulks in each of the buildings.

The entire comic series has solid writing, amazing artwork, and tells a story that is gut wrenchingly brutal, deeply personal, and yet…strangely optimistic and heartwarming.

If you would like to read DMZ you can find it on COMIXOLOGY or buy the physical copy on the Vertigo Comics website.