Today we’re going to take a break from the actual Golden Age of Comics and talk about one of the greatest comic book teams in history, one so famous that their getting their own movie which is coming out this week!

I have very high hopes for this movie.  I like the cast, I like the director, I even like the comic book company that created them and I can’t think of a better way of sharing my excitement than by talking about the comic book series that inspired the movie.

The Suicide Squad works like this.  Any DC villain in government custody can be recruited into the squad, led by a highly capable government official named Amanda Waller.

Each squad is sent on missions that are deemed too dangerous or nearly impossible for ordinary people to complete, which makes a team of super villains perfect because in the even that they fail the government can deny any involvement.  In order to ensure compliance each team member is given an explosive collar (in some versions it’s a batch of explosive nanites in the bloodstream) that can be detonated if they step out of line, killing them in the process.

Here’s the thing, the original Suicide Squad wasn’t made up of hardened criminals with superpowers, it was actually a 1959 comic book about ordinary soldiers taking on seemingly impossible tasks, which meant that for the longest time The Suicide Squad looked less like this 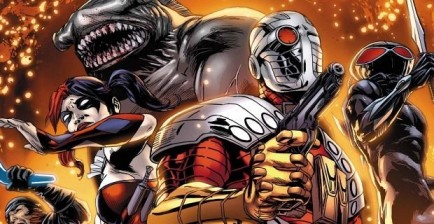 The first use of the name Suicide Squad appeared in 1959’s The Brave and the Bold #25.  However, this was not the first team to use that name in the DC timeline.  That honor belongs to the Suicide Squadron that first appeared in 1963’s Star Spangled War Stories. 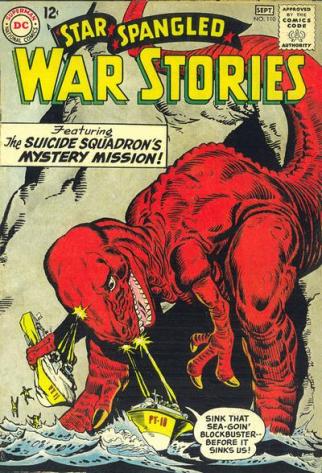 This Suicide Squadron was made up of a ragtag group of soldiers who the government considered to be expendable enough to be sent to a mysterious island to fight dinosaurs.  This iteration of the team is important because they were led by a man named Rick Flagg,

a highly capable military officer who would lead the squad to victory and would help by becoming and established part of the Suicide Squad mythos.  After WW2 ended the Suicide Squad was reformed into Task Force X under President Truman to be the government’s response to an increasingly large number of supervillains and spies.  They were eventually disbanded when Rick Flagg sacrificed himself to stop a device called the War Wheel. 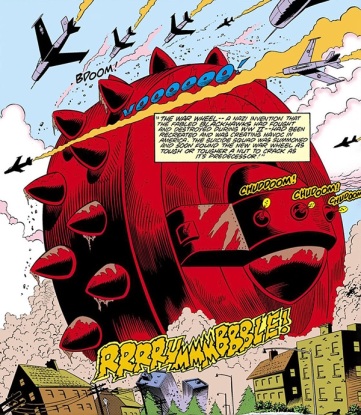 The next group to adopt the name Suicide Squad (although this was the first team to use that name) was a group of four individuals who appeared in 1959’s The Brave and the Bold #25.

Once again the group was led by a man named Rick Flagg, although in this case it was Rick Flagg Jr. the son of the original Rick Flagg.

The group was assembled under the operational name “Task Force X” and adopted the name “Suicide Squad” because each of the members of the team had experienced a horrible tragedy that had affected them so badly they had lost their will to live and didn’t care if they died on a mission or not.  They were the commander and leader Rick Flagg, medic Karin Grace, physicist Hugh Evans, and nuclear scientist Jess Bright.

Their adventures were pretty strange.  Just like the original Squadron, this team did a lot of fighting against dinosaurs. 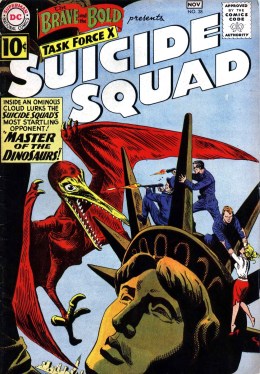 and they were often placed in very perilous situations with little to no back up or support.

However, the title wasn’t selling very well and every member of the team was either killed or wounded during their final mission fighting a Yeti in Cambodia. 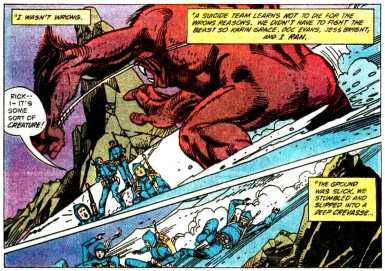 Hugh Evans died after falling down a ditch, Jess Bright was captured by the Soviets and turned traitor, Karin and Rick survived but went their separate ways.  The Squad was disbanded and the title was shut down.

Well, the 1980’s happened.  In 1985 DC Comics launched the Crisis on Infinite Earths story line that essentially erased all the previously existing history and continuity of the DC universe and started from ground zero. 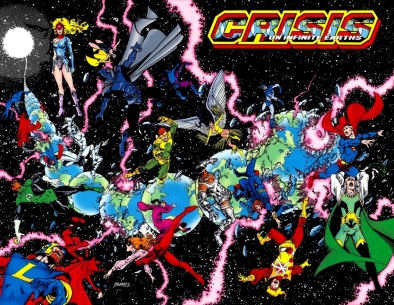 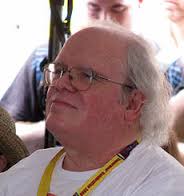 The differences between the new and old versions were quite remarkable.  Instead of volunteering for these dangerous missions by choice many members of the Suicide Squad were forced into service under the rule of Amanda Waller, although the team was still led in the field by Rick Flagg Jr.

Instead of dealing with fantastic threats like dinosaurs this version dealt with classified government black ops missions that had a high mortality rate (this played into the political culture of the 1980’s but we’ll get into that later) and most importantly: there was a revolving cast where any member could be killed at any time.

The current version of the Suicide Squad is one of the most interesting and exciting ideas in comic books today.  However, it is important to remember that if it wasn’t for a heroic band of misfit soldiers and four random people ready to die for the mission, we wouldn’t have this title today.