You know what?  Over the past couple of months this blog series has forgotten its roots.  Lately I’ve been doing more and more special posts about special holidays and even departing from the beloved Golden Age of Comics.  I think it’s time to return to form and talk about some of the sillier moments that made up the early days of comic books in the 1940’s but who can I talk about?  What early superhero from an early publishing company would fit the bill and be just ridiculous enough to get this blog back on track?

The Red Bee made his first appearance in Hit Comics #1 in July of 1940.

I’m not going to lie, that cover image is pretty darn cool.  Also, he was created by writer Audrey Blum,

one of the few ladies writing comic books at the time.

The Red Bee started out as mild mannered Rick Raleigh, an Assistant District Attorney living in Superior City Oregon.  Rick grew tired of watching criminals go free thanks to loopholes in the system and decided to take matters into his own hands and become a costumed vigilante. 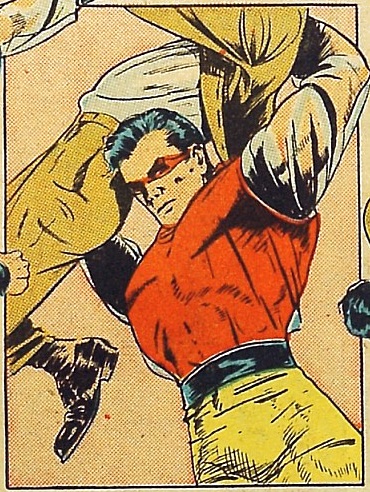 Now most of the pictures I found involved The Red Bee using his hands and feet to beat the bad guys and he was pretty adept at hand to hand combat.  But he had another power, something far greater, and much more terrifying, than mere physical strength.

Bees, the man could train and control bees to do his bidding.

and he used them.

The Red Bee usually winds up on a lot of “worst heroes ever” lists.  I really don’t understand why because HE CAN CONTROL BEES!!

All yelling aside the Red Bee was pretty silly.  In all my research I never saw him use his power to it’s terrifying potential and control a swarm of bees.  Instead he used the power to control a few bees at a time in order to augment his physical combat skills.

Fun fact: apparently he had a favorite bee named Michael.

Sadly the Red Bee didn’t catch on and become that popular of a superhero.  He would battle a collection of gangsters and Nazis until his final Golden Age appearance in 1942.

Without going into too much detail the All Star Squadron was a group of established DC superheroes BUT they were from an alternate dimension that was still stuck in the 1940’s and fighting in World War 2 against the Nazis.  I won’t go into too much detail explaining it but basically it gave DC writers a way to write stories about WW2 superheroes without having to worry about screwing up their main comic book universes.

That man in the yellow uniform with the pink cross on his chest and the swastikas on his neck?  That’s Baron Blitzkrieg and he did this to the Red Bee

The Red Bee died a hero’s death saving the lives of his friends and fellow heroes.

The Red Bee’s legacy does live on in the modern day.  Richard Raleigh’s daughter, Jenna, took up the mantle of the Red Bee in a 2006 miniseries entitled Uncle Sam and the Freedom Fighters.

The new Red Bee had some serious upgrades to her gear and weaponry.

She now had a special battle suit that allowed her to fly, granted her super strength, and two robotic bee assistants capable of firing lasers.  However, a year later she would undergo another major change and became more insect like.

While still in possession of the battle suit she now had actual wings with antennae on her head and the ability to spray pheromones onto targets in order to track them.

Sadly Jenna suffered the same fate of her father in that she just didn’t become all that popular.  She briefly went bad, tried to colonize the Earth, and was stopped at the last minute.  After regaining her mind she quit being a superhero and pursued a career of academic research.

One thought on “Golden Age Showcase: The Red Bee”