So last week we decided to take a look at the Phantom Reporter, a hero who only lasted one issue in the 1940’s but found new life in a modern story about Golden Age superheroes called “The Twelve”

That turned out to be a popular post so let’s take a look at another one of the heroes form this story, one who managed to last a bit longer than one issue and proved to be a major player in the modern comic book series: Electro.

Electro was created by writer/artist Steve Dhalman and debuted in Marvel Mystery Comics Issue #4 in 1940 as a backup feature to more popular heroes of the time such as the Human Torch and the Sub Mariner. 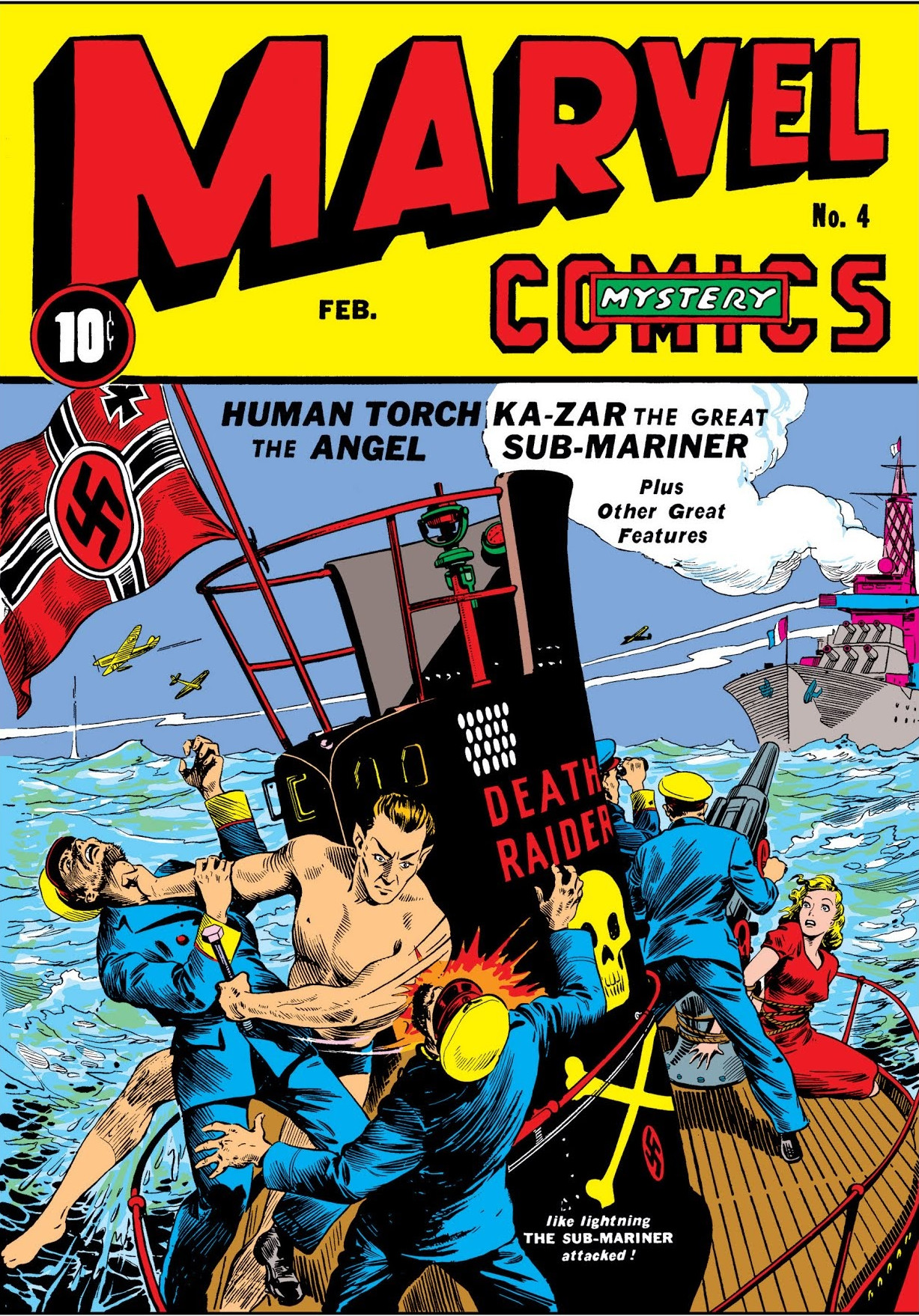 Electro was a robot created by Professor Philo Zog in the name of helping all of mankind.

Electro was an actual robot, not a human flying around in a robotic suit like Iron Man.  Electro was controlled by a special microphone/telephone created by the professor that could be used to summon the robot and make it do its master’s bidding.

The robot itself was pretty powerful in its own right.  Capable of running at speeds in excess of 100 mph, impervious to most firearms and explosives, and capable of lifting a human being with little to no difficulty

Electro was certainly a force to be reckoned with.

Philo Zog’s creation would have a fairly long and successful life as a back up feature in the Marvel Mystery series, which was one of Timely Comic’s biggest and most successful series at the time.  What’s interesting is that many of these stories weren’t really about Electro the Robot but rather about Philo Zog and a collection of twelve human agents who worked for Zog known as “Secret Operatives”.  Basically an Electro story would go something like this: one of the Secret Operatives would be sent out to investigate a crime or disturbance (this could range anywhere from a kidnapping to preventing a full blown international civil war) stumble on something that was far too big for one man to handle, call in Electro, and the robot would make quick work of whatever criminal/drug dealer/dictator/alien was a threat that day.

Electro’s final Golden Age appearance was in Marvel Mystery #19 where Professor Zog and Electro manage to fend off a crazed mad scientist who invents an invisibility potion.  While Electro was defeated by one of the mad scientist’s servants who was using the potion the robot did go out with a bang after fighting off two gorillas.

The robot and his twelve agents just stopped being published, I guess he just wasn’t popular enough to last.

While the creation of Professor Zog wouldn’t be revived until 2008 the name Electro would live on in Marvel history: first as a Soviet agent who fought Captain America in 1954 when Marvel Comics was known as Atlas Comics

and second as the more well known Spider Man villain who made his first appearance in Amazing Spider Man #9 in 1964.

But we’re here to talk about the Golden Age Electro, the one who appeared in the 2008 series The Twelve.

During WW2 Electro was sent to Europe to fight off the Nazis.  He proved incredibly effective and popular with the soldiers, although the Phantom Reporter commented that it was somewhat “creepy” that a man could be killed by remote control.

The series starts off with twelve Golden Age heroes assaulting a bunker in 1945 Berlin.  However, they were discovered, captured by the Nazis, and placed in suspended animation for further study. However, it was too late and everyone who was tied to the project was either killed or captured leaving the twelve heroes trapped in stasis for years.

In 2007 a construction project uncovered the heroes and they were returned to the United States for reintegration into society.  Unfortunately for Electro he remained deactivated and it turned out that the robot had been controlled by a highly sophisticated device that allowed the user to control the robot with his or her mind.  Unfortunately for Professor Zog the shock of losing his robot was too much for his brain and it was reported that he “died of loneliness”.

During this time Professor Zog’s niece attempted to regain possession of her uncle’s device but couldn’t raise the money to take care of it.

Ms. Zog wound up reaching a deal with another hero from the Twelve called the Blue Blade.

In exchange for using the robot in a show the Blue Blade would give Ms. Zog all the money she would need to reclaim the robot.  However, something went wrong and the robot wound up killing the Blue Blade.

It turned out that the robot had not remained idle all these years.  In an attempt to re connect with his old master Electro’s primitive brain began reaching out in an attempt to find a new mind to connect with.  He wound up discovering the mind of another one of the twelve heroes, a Golden Age hero called Dynamic Man, and wound up basically becoming Dynamic Man’s servant.

Dynamic Man was revealed to be evil and used Electro to slaughter innocent people in cold blood.  However, Dynamic Man was eventually stopped at great cost to the rest of the Twelve and Electro reverted back to being a docile robot.

However, this was not the end of Electro’s career.  It turned out that Electro could only be used by one of the twelve heroes that had been placed in suspended animation.  The United States government wound up reaching an agreement with Zog’s niece where they would pay her to use her uncle’s invention for military use.  His was last seen being operated by another one of the Twelve, a hero called the Laughing Man, and tearing through the Middle East with some heavily upgraded weapons.

If you want to get technical than Electro wasn’t really a hero.  He was simply a tool, an invention created by a well meaning scientist who simply wanted to make the world a better place.  But the story of Electro represents some important themes that can be found in a lot of superhero stories: that power isn’t nearly as important as the choices made by those who use it.