Today we’re going to talk about the Black Widow.

The current, and perhaps more famous Black Widow as a product of the 1960’s and was one of the deadliest Russian spies the world had ever known before she decided to turn traitor and work for the United States.

The Black Widow we’re going to talk about today was a bit more…terrifying.

The Golden Age Black Widow first appeared in Mystic Comics #4 in August of 1940. 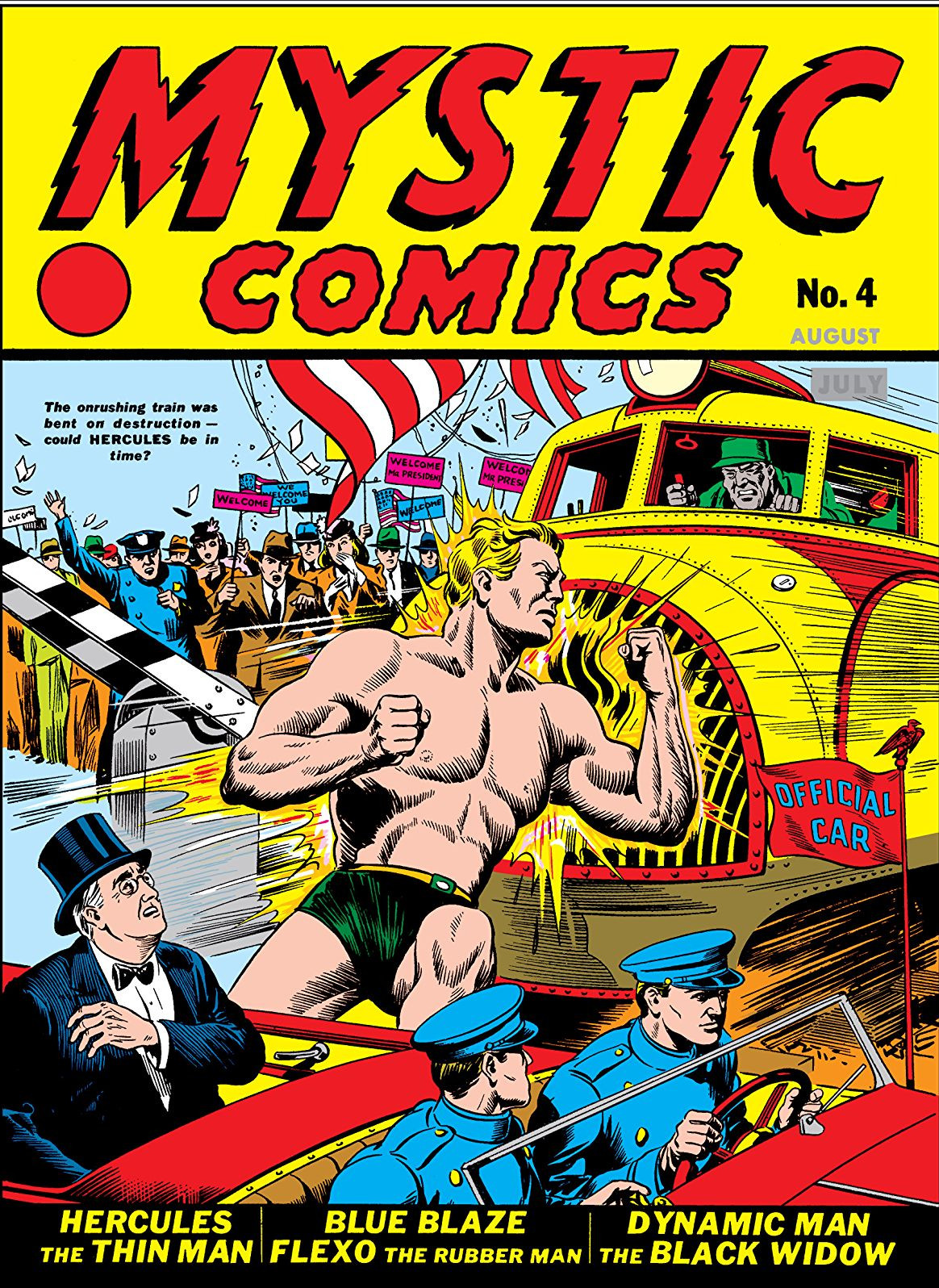 She was created by comic book writer George Kapitan and artist Henry Sahle and was billed as the “strangest, most terrifying creature in action picture magazines”.  Judging from some of her pictures

The Black Widow started life as the psychic medium Claire Voyant (really Timely?  Really?) who was hired by the Wagler family for a seance in order to try to contact their dead father.  Unfortunately, Claire was possessed by Satan (because of course) who foretold that the family would all perish in a fiery death.

The prophecy turned out to be a fast acting one, as the Wagler family was killed in a brutal car accident after leaving from the seance.  However, the son James managed to survive and blamed Claire for his family’s death.

While this was probably the machinations of Satan, James paid the demon no heed and gunned Claire down.

Satan used this opportunity to collect Claire’s soul and turn her into one of his agents.

She would be tasked with acting as the Devil’s agent on Earth, collecting souls that were deemed evil enough to belong to the Prince of Darkness.

In order to fulfill her evil work Claire was given the gift of immortality (although this might not be true), immunity to most mortal weapons, and the ability to kill with a touch much like a Black Widow spider.

I’m not going to lie, I think this is awesome.

Sadly, like most characters we talk about on this blog, she only lasted a couple of stories.  That man in the frilly costume she’s killing?  That was her second victim, a notorious crime boss named Garvey Lang.  She would appear in three more stories where she targeted several villains and doomed them to an eternity in Hell, although there was one recorded instance where she helped heal one of the victims of a man she was charged with sending to Hell.  After that, shedisappeared off the face of the Earth for almost fifty years.

The Black Widow would find new life in Michael J. Straczynski’s 2008 mini series The Twelve, only this time with a revamped origin story.

This time around she gained her powers in 1928, after swearing her soul to Satan in exchange for the ability to avenge the death of her murdered sister.

In 1945 she joined a group of Golden Age heroes in storming Berlin at the tail end of the war.

She’s the one lifting the tank.

However, the raid went bust and the heroes were captured and put into suspended animation where they remained until they were rediscovered in 2008.

After waking up The Black Widow realized that her deal with Satan still applied and she would still be required to kill evildoers and deliver their souls to Hell.  Her first victim was a man named Simon Dexter, who she ripped limb from limb.

However, her reawakening wasn’t all bad.  She befriended several patrons at a goth themed bar

although that didn’t last very long and she wound up developing romantic feelings for one of her colleagues, the Phantom Reporter.

Sadly many of her friends wound up perishing when it was revealed that one of their own had turned evil but thankfully, the Black Widow would get a happy ending.

She wound up realizing that she and the Phantom Reporter were in love,

A happy ending for one of the most troubled anti heroines in all of comics.