For our international viewers Labor Day is an American holiday where a lot of working people get the day off in order to relax and for the nation to honor the people working in the shrinking number of manufacturing jobs in this country and no, service workers usually don’t get the day off.

Sadly there aren’t a whole lot of Golden Age superheroes who worked in factories during the 1940’s, most of them were off actively punching Nazis or saboteurs.

Still, honoring the men and women who worked in American factories during the Second World War is a pretty patriotic thing,

so let’s look at one of the most patriotic superheroes to ever come out of the Golden Age.

Meet the Fighting Yank: a hero who bleeds the red, white, and blue so hard he makes Captain America hide his face in shame. The Fighting Yank first appeared in Neodor Comics’ Startling Comics #10 in September of 1941.

He was created by writer Richard E. Hughes,

Fun fact: Richard Hughes was a pseudonym for his real name, Leo Rosenbaum.  Hughes would go on to be the editor for the American Comics Group from 1943 to 1967.

The origin story is a doozy, and in order to understand it we have to go all the way back to the American Revolution where a man named Bruce Carter is tasked by George Washington to deliver dispatches through enemy lines.

sadly the mission fails and Bruce is killed by British spies.

fast forward a couple of centuries later and Bruce Carter III is being yelled at by his family and fiance for being lazy and day dreaming about his long dead ancestor when he should be doing something.

In what must have been one heck of a mind trip the ghost of his ancestor comes back to life and tasks the modern Bruce to find his ancestor’s cloak, which will give him incredible power.

It turns out the cloak was hidden in his house all along and after donning it Bruce has the power to bend steel and punch through walls.

after discovering the extent of his powers the Fighting Yank goes on his first adventure where he manages to save the life of a United States Senator named Walton.

It’s worth mentioning Bruce’s fiancee, Joan, is actually a pretty developed and capable character for a superhero’s girlfriend.  She’s the one that discovers the plot to kidnap the Senator,

and she handles herself in a fight while Bruce is busy admiring himself in the mirror.

But perhaps the most impressive feat is that she manages to figure out the Fighting Yank’s identity within seconds of meeting him.

It turns out that the people who kidnapped the Senator were Nazi agents who sought to undermine America’s war efforts.

The Fighting Yank rescues a man who he thinks is the Senator but turns out to be a Fascist decoy.

The fake Senator shoots the Fighting Yank, but the hero is saved by the ghost of his ancestor after surviving the wound.

It turned out that the impostor was actually the real Senator’s twin brother (groan) and the Fighting Yank manages to stop the villains in time before they can do anymore damage.

The Fighting Yank would go on to be one of the most popular characters that the Standard Comics organization would publish.  He was so popular that he was given his own comic book title in September of 1942.

The rest of his adventures were very similar to his first.  The Fighting Yank and his girlfriend would be confronted with some sort of fantastic threat posed by enemy soldiers or saboteurs and they would save the day.

It’s worth mentioning that this comic is a pretty good look into some of the more unsavory aspects of American wartime culture, including some really uncomfortable portrayals of Japanese soldiers and people.

He does get to punch a shark though.

It’s also worth mentioning that there was another hero named the Fighting Yank who was published by Timely Comics during the war as well.

This version was a slightly more believable character who was a secret agent sent to China in order to fight the Japanese.

He wasn’t nearly as cheesy or as popular as Standard’s version.

Standard Comics reorganized in the late 1940’s and the Fighting Yank disappeared in 1949 after a stint in Nedor Comics’ series America’s Best Comics. The hero would be revived in the 1990’s with a publisher called AC Comics reprinting some of his titles.  He would later receive a new costume, which was a homage to Jack Kirby’s hero the Fighting American, in 2001. 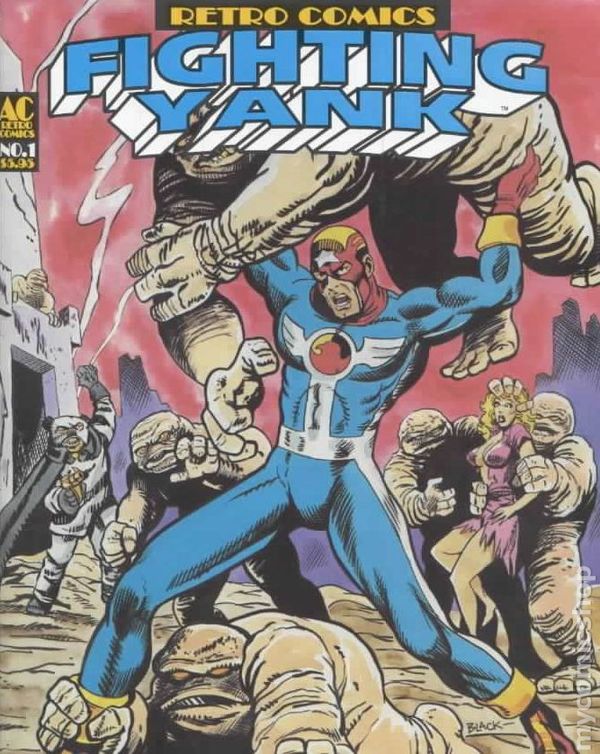 The Fighting Yank would also play a part in Alan Moore’s publishing venture America’s Best Comics where it was revealed that Bruce Cater had a daughter named Carol, who wound up inheriting her father’s powers. 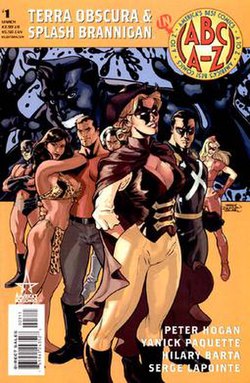 While Carol received her powers in a way similar to her father she was uncomfortable with the name “Fighting Yank” and decided to call herself “Fighting Spirit”.

The Fighting Yank is pure World War 2 American super cheese.  He was created as wartime propaganda, he helped promote some of the worst stereotypes of Japanese people I’ve ever seen, and he was half a bald eagle short of bleeding red white and blue.

That being said, it was obvious who he was from the get go and he made no apologies for being one of the most American characters in an industry filled with dozens of heroes wearing the red white and blue.