Today we’re going to do something different.

I was planning to try and talk about a famous Golden Age comic book villain, but since most of the bad guys were usually one note, thinly veiled Nazis. 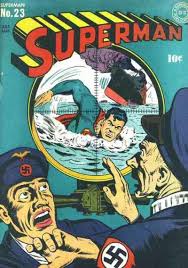 or usually wound up dead after a single issue,

it was kind of difficult for a villain to really take off.

The thing is, during my research I discovered a comic book villain called “The Mad Arsonist”.

That’s him in the background holding the vial and looking like a half crazed madman.

The story behind him is simple, he’s a crazy pharmacist who liked to set things on fire and watch them burn.

While the villain himself was pretty intriguing what I wound up discovering is that the company that published his story, Camera Comics, had a pretty interesting backstory itself.

So today, instead of talking about a single character, we’re going to showcase an entire company and the work they did.  Today we’re going to talk about Camera Comics.

He would move on to publishing a full size magazine, titled U.S Camera Magazine, in 1938.

The publication was a success and would eventually reach a peak circulation of over 300,000 copies.

In 1945 the U.S Camera Publishing Corporation looked at the pop culture landscape, noticed that this new fangled “comic book” was really popular with young people, and decided to enter the comic book publishing game themselves.  Their first publication was Camera Comics #1 in October of 1944.

It’s important to understand that these comics were created as advertisements first and stories second, which is a crying shame because a lot of the work that came out of these comic books was really good.

Camera Comics produced six volumes of work and each volume was usually made of three types of material: ads and real world tutorials, fictional stories, and historical/biographical work.

The first type of material was pretty straightforward.  Since Camera Comics was created to advertise and sell photographic equipment it would make sense that a lot of ads were placed in each publication.

Also, each issue had two issues talking about certain aspects of the hobby.  These included instructional pages on how to create a dark room,

to showing how American soldiers set up, took, and developed recon photos for the war effort.

Naturally, the war effort led to the second type of material that the comic title published: traditional comic book stories.

A lot of these stories were similar to the traditional wartime superhero stories that were popular throughout the war.  The big difference is that instead of superpowers and bright costumes saving the day, these heroes usually saved the day by using a camera in some capacity.

For example, “The Grey Comet” was a story about an Air Corps (the Air Force didn’t exist until after the war) pilot who managed to stop a German guided missile and somehow managed to complete a reconnaissance run as well.

This would eventually develop into Camera Comics creating its own characters such as “Kid Click”.

He was a young kid with a passion for photography and would go around solving small time crimes where his film would always be used as evidence to apprehend he criminals.

Another character of note was Linda Lens.

While Kid Click was a pretty blatant gimmick to sell cameras to kids, Linda Lens was surprisingly progressive for comics.  As you can see above she was a capable, independent photographer with her own business which by all accounts was doing well.

What makes it even more interesting is that she wound up becoming a freelance photographer for the U.S Army and was able to appear on the front lines as a combat photographer.

and played an important role in capturing the Nazi spy.

The third and final type of story that appeared in these books were short biographical comics about famous historical figures that helped develop the art and technical aspects of photography.  These included pioneers such as Matthew B. Brady, and Edward Maybridge, a man who was one of the first people to showcase how a series of still photographs could be turned into a moving picture.

All in all, Camera Comics was a fun, engaging, and informative advertisement for photography and I like to think that it was a success in convincing a generation of children to take up a camera as a hobby.

Despite some genuinely good work and sincere thought that went into a lot of these comic books, at the end of the day they were just ads.

Camera Comics played second fiddle to the much more serious publications that Thomas Maloney was publishing and his other work was  finding great success in the popular culture.  In fact, his U.S Camera Annual: 1945 was lauded by the New York Times as “The best picture book on the War to date”

Camera Comics was cancelled in 1946 after a nine issue publishing run.

These comics were far better than they had any right to be.  Even though they were essentially glorified ads there was some genuine heart, passion, and talent that went into publishing these stories and that deserves our recognition and respect.  Whether it was telling fictional stories about characters using their cameras to save the day,

telling stories about the pioneers of photography,

or showing kids how they could become better photographers themselves,

Camera Comics was a publication that set out to make photography better for everyone.