If you’re like me you probably went to go see the new Marvel movie this weekend: Dr. Strange.

If you haven’t seen it my spoiler free review is this: GO SEE IT NOW!!!

It’s trippy, mind warping, Benedict Cumberbatch is an awesome edition to the Marvel Universe, and it has some of the coolest fight scenes I’ve ever seen.

Normally I would do a blog post about the history behind Dr. Strange but here’s the thing, the character really doesn’t belong to the Golden Age of Comics.

Dr. Strange premiered in 1963 in the anthology series Strange Tales.  Since the character was a sorcerer and master of magic Ditko used the comic to create some of the coolest and most mind bending artwork ever seen.

Sadly, while the art was fantastic, Dr. Strange didn’t really catch on as a solo character in his own series like Iron Man or the Hulk.  While he was popular with college kids who were experimenting with Eastern mysticism and psychedelic stimulants like LSD, the character was more at home as a supporting hero who was useful to other heroes whenever they were confronted with magical threats.

Like I said before, Dr. Strange really doesn’t fit the bill for this blog.  However, while researching the character’s history I discovered that Stan Lee took a lot of influence for Dr. Strange from an old radio program called Chandu the Magician.

After looking up Chandu on the internet I decided to write this week’s blog post on this instead.  Sure it’s a radio show turned into a movie series, but it’s got enough comic book elements in it to justify a place here.

Chandu the Magician premiered in 1931 on the Los Angeles station KLR.  The show featured a man named Frank Chandler who was played by radio actor Gayne Whitman

Frank was an American who had traveled to India to learn the mystic arts from the yogis.  Such skills included astral projection, hypnosis, and escape artistry.

After he had learned everything he could he was sent into the world to fight evil in all its forms with the new identity of Chandu the Magician.

He would have various adventures every week, broadcast in 15 minute adventures, and sponsored by companies such as White King Soap and Beech Nut Gum.  He had several love interests such as the Egyptian princess Nadji who was played by actress Veola Vonn.

On top of the radio show, they even made a movie about Chandu in 1932. and horror movie icon and king of over the top epic performances, Bela Lugosi as the villain Roxor.  You probably know him better as Dracula.

The movie was 71 minutes of glorious 1930’s cheese filled with magic, sappy romance, and death rays.  If you don’t believe me please watch this clip of Bela giving the best damn evil villain monologue I have ever heard.

The movie was successful enough to spawn sequels and I can assume the studios loved Lugosi because they cast him as Chandu in the sequel. 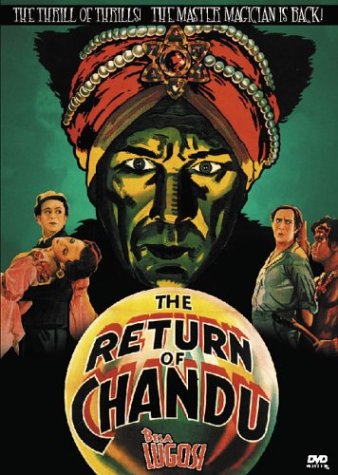 Life and society moved on, leaving radio and old heroes like Chandu in the dust.

While I normally feel a pang of regret and nostalgic longing for the heroes that I write about in this blog I’m really not feeling a whole lot for this one.

Sure he was a cool magician and yes the adventures were creative and exotic, and we got one of the best Bela Lugosi performances I’ve ever seen out of it, but the character was definitely a product of his time.  There’s a pretty strong undercurrent of some of the more uncomfortable ideas that permeated American entertainment during the 1930’s.  Everything from blatant racism to casual sexism is on call here.  Granted, a lot of the early comics played with that as well, but I get the feeling that a lot of people won’t be lining up to see the Chandu reboot at the box office.

Still, it was a fun little story and it seemed to have enough of an effect on a young Stan Lee to create Doctor Strange, so it wasn’t all bad.

One thought on “Golden Age Comics: Chandu the Magician”