Today it’s a pretty simple project.  Instead of a romantic graphic novel or a five part sci fi epic (holy crap, looking back we do a lot of science fiction on this blog) we’re looking at a comic book project that tells an entire story in a single page.

Today we’re looking at Air Pirates vs. the Dragon. 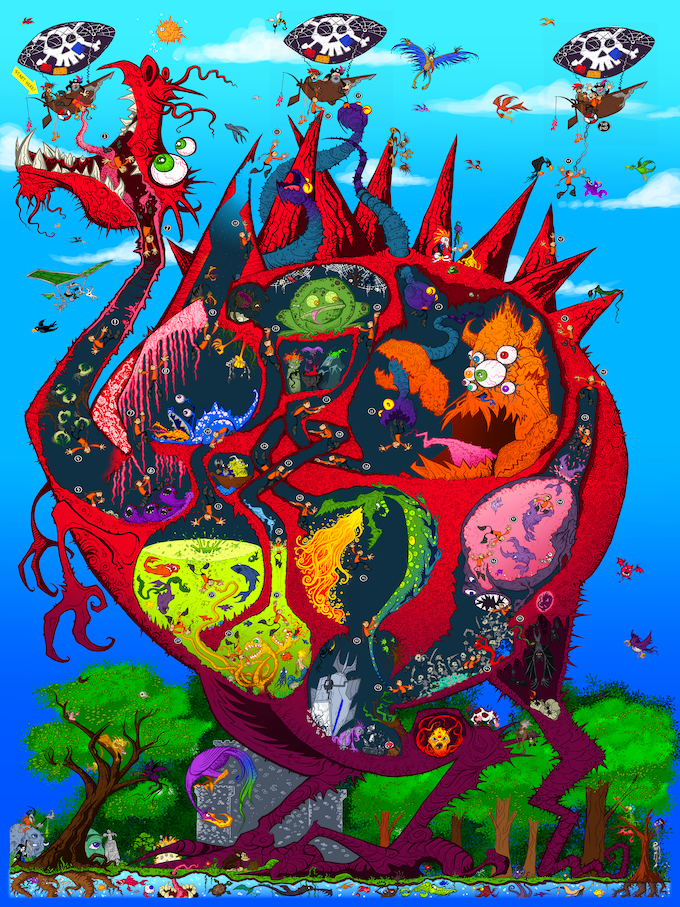 The project is a single large poster detailing a young air pirate’s adventure as she gets swallowed up by a massive dragon and has to escape from the bowels of the beast’s stomach.

When you hear the word “comic” I’m going to bet a lot of you think of this.

There’s nothing wrong with that, it’s just that some of you might also think of this.

While the idea of comic books, pictures and words combining to tell a story, has pretty universal appeal the format of comic books has developed according to the needs of the story and the resources available at the time.

For example, did you know that American comic books tend to be 22 pages long so the artist could produce art on a monthly basis?

It’s important to remember that comics don’t need to conform to a single format, and if you’re a fan of Scot McCloud’s Understanding Comics,

you know that comic books don’t need to stick to a certain format in order to be considered comics.

This is a comic,

this is a comic,

heck, you could even make the argument that this is a comic.

The point is that the word “comic” can mean a lot of things and Air Pirates vs. The Dragon thinks so too.

The entire comic is a single poster that tells the a story.  You follow the numbers on the poster and it walks you through an entire story on a single image.

I think that’s really neat, and I think this project could open the doors for a lot of people to play around with the idea of a comic and come up with some really cool ideas.

Also, the artwork is really cool, colorful, and filled with neat little details that make this a fun and engaging “read”, but you already knew that from looking at that artwork.

Plus, at some of the higher levels you get your pick of some pretty great pinups and other artwork.

It’s some really creative and cool stuff, definitely worth your time and money.