Before we begin, I just want to say thank you for two very big milestones.

First, last week’s blog post on Truth: Red, White, and Black was the single most successful blog post we’ve ever had on this site.

I was absolutely blown away by the audience and the wonderful conversations that the article generated.

Second, yesterday was our two year anniversary as a blog and a website.  I’m not going to lie and say it’s been easy, but watching people enjoy everything we’ve worked so hard for has made this little venture worth it.

Anyway, let’s talk about a super hero that killed a whole bunch of Nazis and called himself the Grim Reaper.

The Grim Reaper first appeared in Standard Comics’ The Fighting Yank #7 in February of 1944.

As you might be able to figure out from the cover, the entire issue had something of a military theme to it, especially since the United States was in the last full year of the war in Europe.

The Grim Reaper was published by Standard Comics and was created by comic book writer and editor Richard E. Hughes.

The pictures above show Hughes’ many pseudonyms which he used since he was an incredibly prolific comic book creator in a career that spanned the 1940’s to the 1970’s.

It’s worth mentioning that the Grim Reaper is something of an oddity in Golden Age superhero comics.  While many of his fellow heroes started off fighting common criminals and spies, the Grim Reaper was thrust straight into the front lines of the war in Europe and got right down to kicking Nazi butt.

It’s also worth mentioning that Richard Hughes was actually a pretty good writer, because The Grim Reaper’s stories were pretty good.

In his first appearance our hero makes it very clear that he has no qualms about shedding German blood.

Also, he manages to save a concentration camp full of prisoners and captured Allied pilots so the Allied war effort can destroy a Nazi aerodrome.

Apparently, this story was so popular and well received that the Grim Reaper would be given his own title and cover appearances after his first story.

To be perfectly honest, I think that this is one of the greatest Golden Age covers I’ve ever seen.

The Grim Reaper’s new adventures were more of the same deal with him fighting the good fight in Europe and killing Nazis left and right.

What’s really interesting about these stories is just how human and normal they are. The Grim Reaper is actually more of a secondary character and the writer tends to focus on the plight and effort of normal humans actively fighting the Nazis across Europe.

Sure, the first page has a large picture of the hero, but the story itself is about the Greek resistance movement that sprung up to fight the occupying Nazi force.

It’s also worth mentioning that while the first Grim Reaper story falls into the typical tropes of turning the hero’s Nazi enemies into monsters who don’t have a very keen grasp of English and like to talk “in ze stereotypical German akksent!”

The funny thing is that, during his first main story, the writer goes out of his way to actually humanize some of the Nazis by having a Gestapo officer actually save the Grim Reaper’s life and reveal himself to be a German working against the Nazis.

They would eventually give the Grim Reaper an origin story in his second issue.

It was revealed that the Grim Reaper was actually an American student studying in France named Bill Norris who decided to stay behind in Paris in order to continue his studies.

The Nazis, in a blatant disregard for human rights and the Rules of War, sent Bill to a concentration camp when he tried to protect an old man from being beaten by a group of soldiers.

Sure, the soldiers had every right to arrest Bill for what he did, but you don’t sentence someone to slave labor when they assault your men without weapons.

While in the camp, Bill meets a leader in the French Resistance and manages to escape.

He decides to help the French and dons the Grim Reaper costume to fight the Nazis out of patriotic duty.

The Grim Reaper would go on to have a couple more adventures fighting the Axis powers, but then the war ended.

The Grim Reaper was too popular to be cancelled, so he decided to go and fight gangsters and common criminals instead.

Honestly, the new stories were nothing special and the Grim Reaper found himself playing second fiddle to other stories and characters that were becoming more and more popular in post war America.

Standard comics went out of business in 1956 as the comic book market dried up and left many of the smaller publishers bankrupt.

The Grim Reaper would have remained forgotten if it wasn’t for the best beard in comics, the incredibly intimidating Alan Moore.

and he scooped up many of the Standard Comics’ characters that had slipped into public domain which he used in a spin off series called Tom Strong.

The Grim Reaper would eventually be killed in the Tom Strong spin off series Terra Obscura. 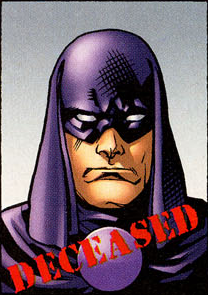 In the end The Grim Reaper was a pretty typical flash in the pan Golden Age superhero.  He existed, had a pretty short run, and faded into obscurity quickly and was only remembered by people who were truly interested in this particular time in comics.

With that being said, he was well drawn (for the time), had a pretty sensible backstory, and was surprisingly well written for the time.  Like many real life people who were fighting and dying in Europe and the Pacific during the war, the Grim Reaper did his part to beat back tyranny and evil and that is worth celebrating.