So Thor: Ragnarok is coming out this weekend.

I’m really excited for it because I have a soft spot for Marvel’s Thor.  I like his power set, I like that he gives the Marvel Universe a sense of scale and grandeur,

and I’m a big fan of Norse mythology so his connection to the gods and heroes of the past is greatly appreciated.

With all that being said, I’m a bit surprised that Thor is such an important part of comic book history and lore.

The Norse god of thunder made his first appearance in Journey into Mystery #83 in 1962, he was created by Stan Lee, Larry Lieber, and Jack Kirby.

The date of his creation puts him far outside the Golden Age of Comics and into the part of comic book history that saw the rise of Marvel Comics and the Silver Age.

Why did Thor arrive so late?  Well, I’m not so sure, but I’m willing to bet that part of the reason is because the Golden Age of Comics was more interested in Greek and Roman mythology,

and another was the fact that the Jewish American comic book creators of the 1940’s weren’t too keen on using the Germanic and Norse gods in any of their work, mostly because the Norse gods were being co opted by America’s enemies. 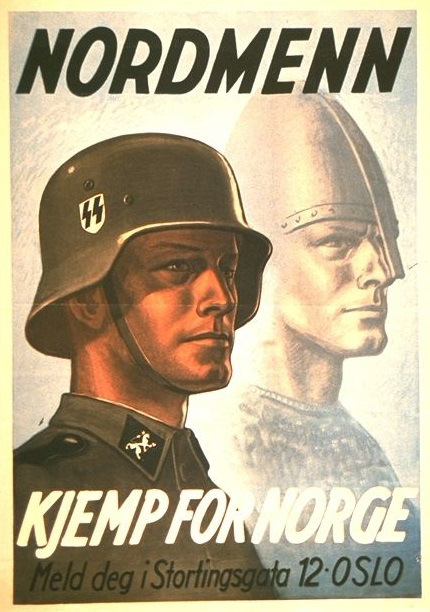 Now, the Nazis weren’t the first to use Thor and Norse legends to promote their agenda.  Norse mythology was a big part of the rise of German nationalism in the late 19th century, especially in works of art such as Wagner’s Ring Cycle.

It’s worth noting that Hitler was a huge fan of Wagner and the Nazis would go on to use a lot of Nordic imagery in their propaganda and recruitment efforts. So what makes the Thor of Marvel Comics so different?  What would convince two Jewish American comic book creators to take one of the biggest gods in the Norse pantheon and include him in their comic book universe? 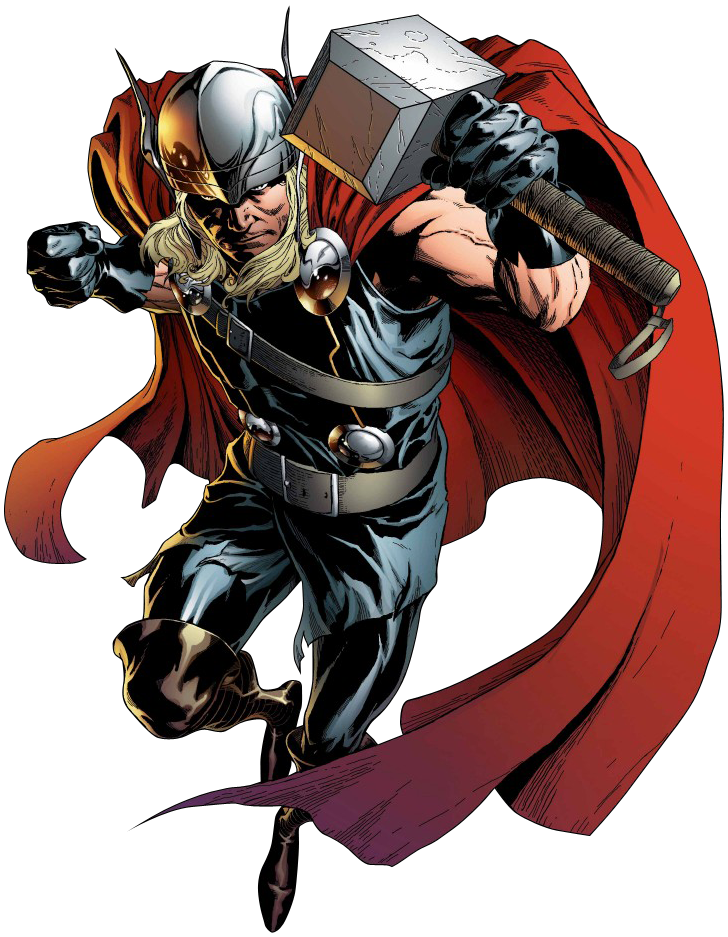 Well, for starters the Thor of Marvel Comics has a few key differences that separate him from his Nordic cousin.  For starters, Kirby gave Thor and the Norse gods a very unique design and background.

Marvel’s Asgard is still inspired by Vikings in their appearance and mannerisms, but there’s this sort of techno mystic vibe about them that sets them apart from actual history and more into heroic fantasy.

Second, Marvel’s Thor is actually presented as a fully mortal human in his origin story.  In his first appearance, the mighty god of thunder is actually a mild mannered and meek human named Donald Blake who stumbles into a cave and discovers a walking stick that turns him into Thor. Marvel’s Thor was a human before he was ever a god.  Was this a way for Lee and Kirby to get their revenge against the Nazis by co opting the mythology they had used?  Was it part of a long term plan for the Marvel comic universe?  Was it just there because it sounded and looked cool?  I have no idea, but I’m sure there are smarter and better people out there who know more about this sort of thing than I do.

So we’ve established that Marvel’s Thor is different enough from the Thor of myth to the point where we can consider them to be two separate entities.  However, there must have been someone in the Marvel offices that wasn’t convinced because in 1978 Marvel published Invaders #38.

For those who don’t know, the Invaders series of books was a way for Marvel to tell more stories using their characters that had been created during the Golden Age and fought during World War 2.

We can see the classic heroes: The Human Torch, the Submariner, and Captain America, and they’re all doing what they do best and punching Nazis in the face.  But for issue #32…well look at the cover. 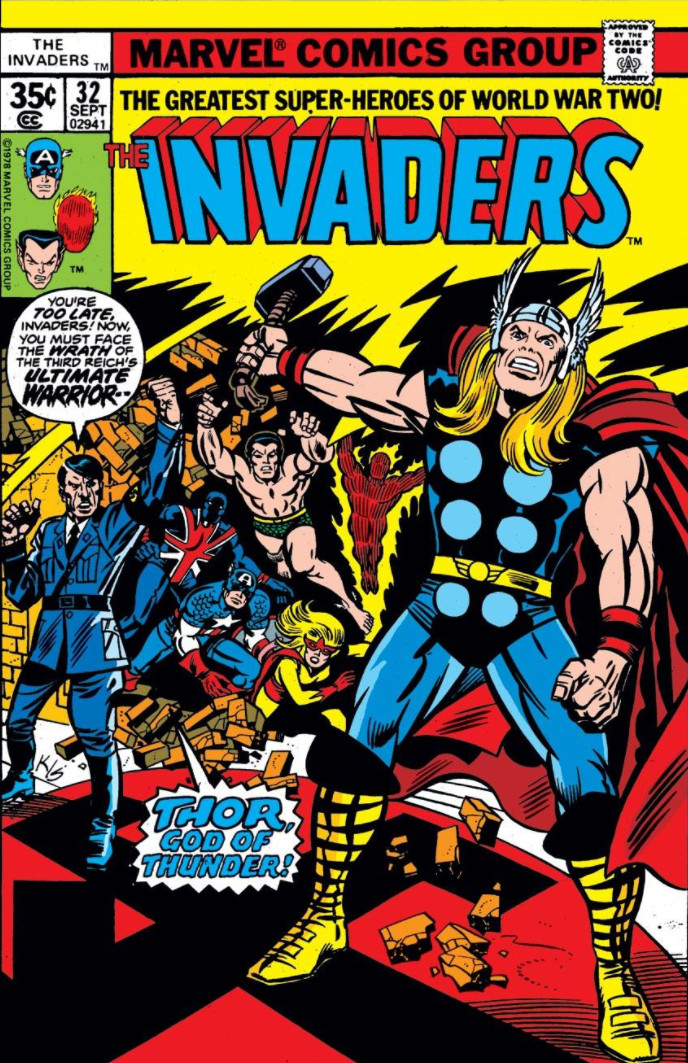 Yes that is Thor, and yes that is Adolf Hitler gloating about how he controls the god of thunder.

The plot of the comic was pretty straight forward.  The Nazis figure out how to access other dimensions and manage to summon Thor to Hitler’s bunker. 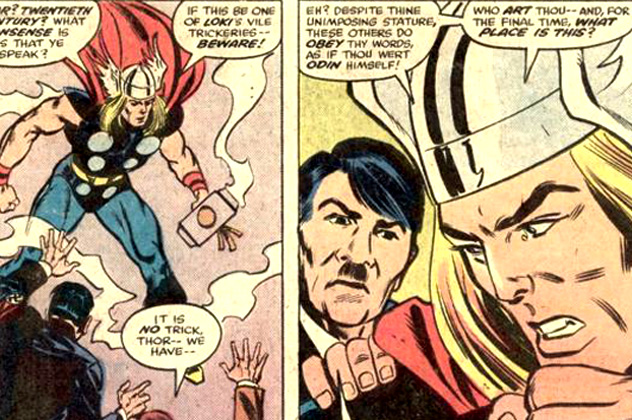 The confused Thor is easily duped by Hitler into believing that the Germans are the victims of the war and that if Thor wants to be a real hero, he needs to go and kill the Russian leader: Josef Stalin.

In the next issue Thor faces off against the Invaders. 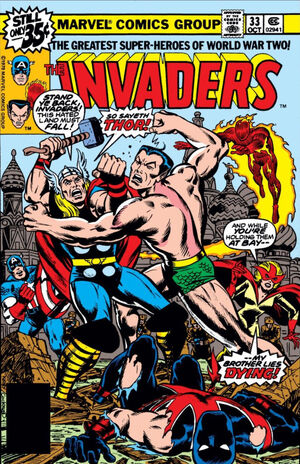 However, Hitler makes the classic super villain blunder and begins boasting about how he will use the Norse gods to conquer the world.

Thor manages to listen in thanks the efforts of Victor von Doom and he finally sees the error of his ways.  The day is saved, good triumphs over evil, and the story ends after two issues.

So there you have it, the time that Thor fought for the Nazis in the comic books.  You could say he was duped and fooled into doing it so you could argue that it really wasn’t his fault.  But considering the relationship that Thor and the rest of Asgard had with German nationalism and the Nazi movement I would argue that these two comics were a necessary part of Thor’s mythology in order to distance himself from any unfortunate comparisons to one of America’s greatest enemies.