It’s been a while since we had a lady superhero on this blog that didn’t have a huge mainstream movie come out this year.

Today we take a look at the comic book superhero Miss Masque and no, she is not a Carmen Sandiago clone…although that would be pretty kickass.

Miss Masque made her first appearance in Exciting Comics #51 in September of 1946 and was published by Nedor Comics, a division of the company Standard Comics.

She shared the limelight with her slightly more famous superhero comrade, The Black Terror.

That was the cover of her first issue, this is the double page spread that introduced her to readers:

I’m not going to lie, as first impressions go that’s a pretty good one.

As for creators, there are no author or artist credits on any of her stories.  However, artists Alex Schomburg and Frank Frazetta have been credited with supplying several covers featuring Miss Masque.  For anyone who might not know, Alex Schomburg was one of the most prolific and dynamic cover artists of the Golden Age of Comics. and Frank Frazetta is the reason why we think Conan the Barbarian looks like a chiseled barbarian warlord.

Anyway, back to Miss Masque.  Her backstory is simple, she’s a socialite named Diana Adams and she moonlights as a superhero, that’s it.  No tragic event, no dead parents (that we know of), and no lab accidents.

She’s just an ordinary lady with her wits, two pistols, and a lot of time on her hands.

Her first adventure is a simple one.  After her car breaks down she attempts to get help from a greedy old farmer who is currently engaged in a water dispute with his neighbor.

The farmer attempts to fix the problem by hiring a bum to burn his neighbor’s property to the ground but the bum attempts to steal from him, the farmer gets violent, and Diana changes into Miss Masque in order to investigate.

The farmer knocks her out (this kind of happens a lot in the future) and attempts to ditch the evidence by burning his house down.

All pretty standard evil so far, but he tried to kill the dog and that is unforgivable.

Miss Masque escapes and tracks the farmer down, only to have him drown in a cruelly ironic way.

That…is not a good way to go.

Most of her stories followed a similar format.  Her stories would open with a massive double page spread,

and then she would go on to solve the “case of the week” with little to know continuity between issues.

It’s worth noting that she was a pretty capable superheroine.

She would find a problem that usually involved whoever she was dating at the time, discover some dastardly scheme, and kick all kinds of butt and have the situation wrapped up in a couple of pages.

The artwork is pretty good too.

The formula must have worked because Miss Masque turned out to be pretty popular.  She got a couple of cover appearances,

and she even became one of Nedor’s top three characters along with the Black Terror and the Fighting Yank.

It’s worth mentioning that she underwent a costume redesign around 1947 where she showed off a bit more skin.

Sometimes it’s important to remember that stereotypes about women in comics exist for a reason.

Nedor Comics must have been undergoing the same troubles the entire comic book industry was suffering through in the late 1940’s because they were consolidated into their parent company Standard Comics in 1949, which went under itself in 1956.

It almost seems like a broken record at this point but Miss Masque most likely suffered the same fate that befell most Golden Age superheroes in the fifties when the comic book industry was gutted by parents and lawmakers worried that comics were corrupting their children.

If I had to make an educated guess she was doomed from the start since her initial publication date of 1946 lines up with the decline of the superhero genre in American comics and it’s pretty safe to assume she was created as an attempt to boost sales.

However Miss Masque, along with most of the Standard Comics’ library of characters, would receive a reboot in the 1990’s when most of them entered the public domain.

She wound up becoming pretty popular at AC Comics, making a couple of cover appearances in their annual issues,

and she even got her own solo series.

In this new continuity she retained her identity of wealthy socialite Diana Adams only this time her costume is the source of her power and her will to do good, since it’s possessed by a “spirit of justice”. 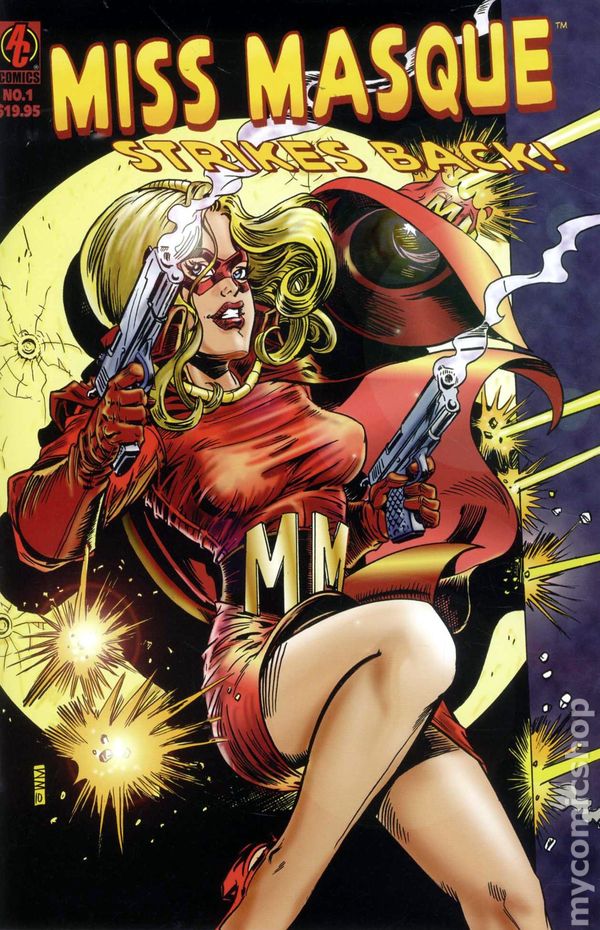 I’d also say it was possessed by the spirit of 90’s comic book cheese.

She also appeared in Alan Moore’s Terra Obscura series in the early 2000’s,

where she was engaged in a romantic relationship with another character named Fighting Spirit.

Most recently Miss Masque was part of Dynamite Comics Project Superpowers series from 2008 to 2010.  In this series she got another costume change where she looks even more like Carmen Sandiago,

she also suffers from amnesia and has actual superpowers this time.  She can replicate other people’s appearances, although her powers seem to be a bit ill defined.

Dynamite even gave her a spinoff solo series in 2009 which lasted for four issues.

Maybe it’s the red and the artists’ fascination with her legs that makes her so popular.

Miss Masque is one of the best female superheroes to come out of the Golden Age of Comics.  While we tend to look back at that time as a place where men ruled and women were considered to be side props, it’s important to remember that there were people out there who thought much differently and were willing to put a lot of time and effort into creating capable and well written female comic book characters.