When writing about the Golden Age of Comics, one of the fun little treats is discovering and sharing the origins of the tropes and ideas that permeate the genre to this day.

Batman was the the first superhero to have his parents killed,

Doll Man was the first superhero who used his ability to change size as a superpower, Superman was the first hero to have a secret identity,

We’ve talked at great length about the impact that female characters have had on the comic book industry, and while Wonder Woman may be the most famous super heroine of the Golden Age,

there were several lady superheroes who came before her and a woman named Fantomah is considered to be the first female superhero in a comic book.

Today we are going to talk about a woman with strange and mysterious powers and who some consider to be America’s first super heroine: Olga Mesmer.

Before comic books were a thing there were comic strips, serialized stories that were published in newspapers across the country and could range from a strip with a few panels,

to grand and complex illustrations that could take up an entire page.

While the comic strip industry laid the groundwork for an entire generation of comic book artists, it was the pulp magazines that laid the foundation for the themes and tropes that would define the future of superheroes.

The pulps were fiction magazines that were really popular for the first half of the 20th century.  They got their name from the cheap pulp paper they were printed on, one of them many ways they cut corners and lowered production costs.

They made up for the cheap quality with lurid and fantastic stories that helped influence the heroes that came after.  The Shadow was a pulp vigilante who prowled the streets at night and hunted criminals, and John Carter was a war veteran who found himself transported to Mars, where the planet’s gravity gives him superpowers.

While it’s impossible to pinpoint it exactly, it’s easy to see how the creators of Batman and Superman must have been influenced by their popularity.

Olga Mesmer was an interesting case.  She was a comic strip that was initially published inside a pulp magazine.  Specifically, she appeared in a magazine hilariously titled Spicy Mystery in September of 1937. 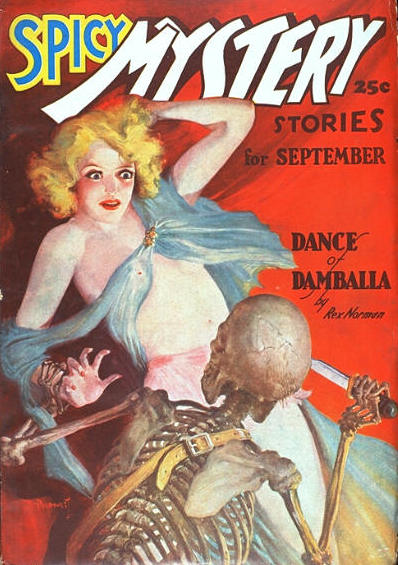 The book was published by a company called Culture Publications.

As for the art itself, nobody really knows who created the artwork or wrote the stories, since old timey publishers didn’t give a damn about creators rights or credit.  However, we do know that the artwork was contracted out to an art studio known as Majestic Studios, which was owned by a man named Adophe Barreaux. 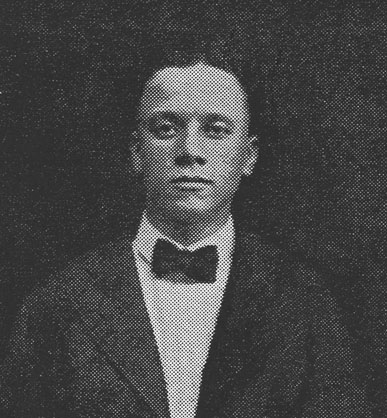 Barreaux was a well known and established comic book artist from Charleston, South Carolina who worked for several ad agencies and drew other comic strips for Spicy Mysteries such as the raunchy “Sally Sleuth”,

and his own syndicated strip: “The Enchanted Stone of Time” 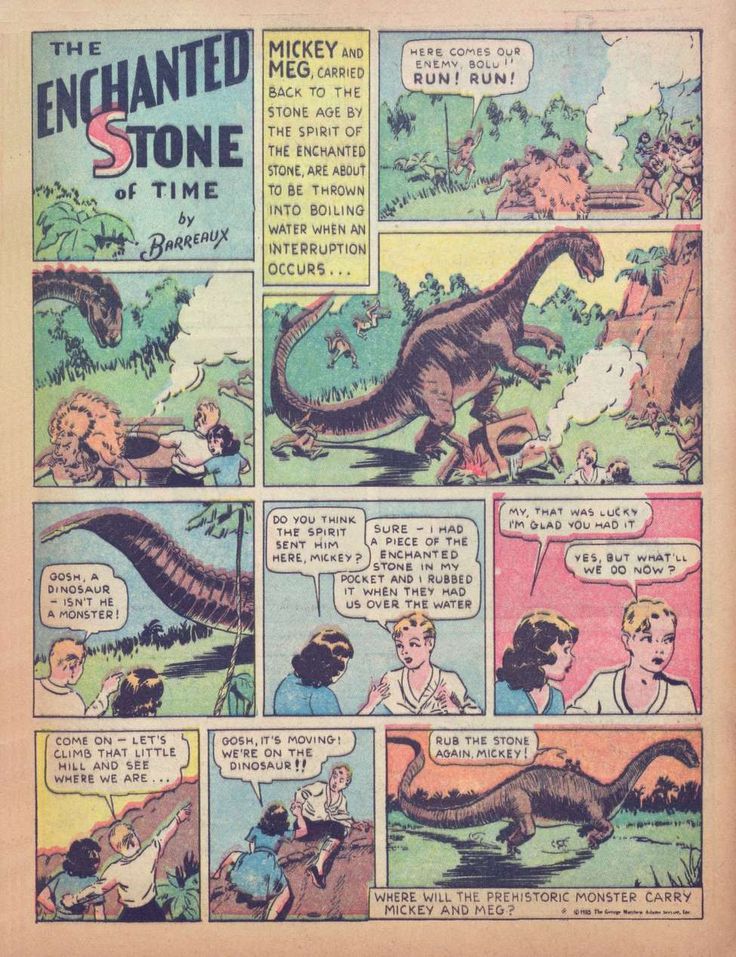 As for Olga Mesmer herself, her origin story is actually quite interesting.

She was the daughter of a royal family originally from the planet Venus and ruled a secret kingdom under the Earth.

It’s really interesting to see how people in the past were convinced that there was a whole different world underneath our feet.

Olga’s mother was the queen named Margot who had been removed from power during a coup d’etat from a villain named Ombro.  She lost her memory in the escape and met a scientist named Dr. Hugo Mesmer.  The two fell in love, married, and had a child together.  But while she was pregnant, the Doctor began to suspect that his wife was different and his curiosity led him to exposing her to “soluble x-rays”, which left her blinded and bedridden.

Yeah, real father of the year material there.

Margot eventually recovered and discovered that she had the ability to see in the x ray spectrum and could see through walls.  This gift wound up killing her husband (people didn’t really understand x-rays back then) and Margot fled back underground.

Olga was born shortly after and inherited her mother’s ability to see through walls and super strength. 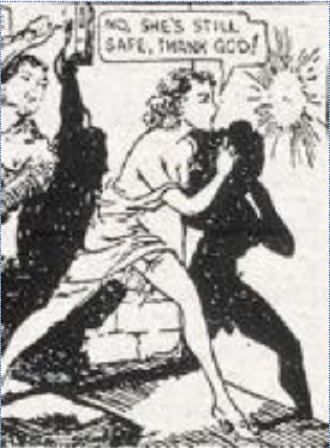 She wound up rescuing a man named Rodney Prescott from a group of assailants, which she dealt with by casually killing them.

However, Rodney was seriously wounded and was only saved by a blood transfusion from Olga, which granted him a small measure of her power.

The two became a duo, traveling underground to rescue her mother and defeat the evil machinations of Ombro.

The story ended in 1939, with the two traveling back to Venus and being proposed by a prince of Mars named Boris.  Apparently the two planets were at war with each other and their union would hopefully bring peace to the two cultures.

I have no idea what happened next, although I would like to assume everything wound up fine.

Action Comics #1 came out in 1938 and pop culture and entertainment was changed forever.

Comic books became the new literary fad for young boys and girls and while comic strips continued to exist through syndication, the age of the pulp novel as a dominant cultural force was over.

Adolph Barreaux went where the work was and wound up producing comic book art for a whole bunch of publishers.  He ended his career in 1953 after working as a children’s book illustrator for a company called Trojan Publications.

Olga Mesmer is less than a footnote in pop culture history.  She played a small part in a fairly small magazine that was part of a culture that preferred to read her stories and then throw them away.  Even her status as America’s first super heroine is up for some debate since she doesn’t display many of the tropes we associate with heroes today.

However, it is my honest opinion that Olga Mesmer was a hero and that she deserves far more recognition than she is currently getting.  Plus, it’s kind of cool to see a woman from the 1930’s kick so much ass.

Today we are going to give the ladies of superhero comics a chance to shine.  While we have previously talked about Miss Victory, one of the earliest super heroines who beat Wonder Woman to the punch,

she was not the first super heroine.  That honor belongs to the queen protector of the jungle: Fantomah.

Fantomah first appeared in Jungle Comics #2 which was published in February of 1940.  She was written as a side story to the introduction of another superhero called the Red Panther.

Before we go on it’s worth mentioning a couple of things.  First the company behind Jungle Comics was a pulp magazine publisher called Fiction House and one of the most popular pulp heroes at the time was the famous Tarzan. 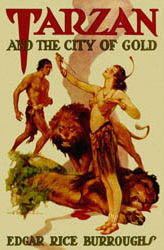 It seems that copying much more successful characters and flooding the market with cheap copycats is nothing new.  Anyway, Fiction House had a bit of success with their own pulp character Sheena: Queen of the Jungle (a character so popular that she would get her own television series)

and in 1940 they decided to expand their comic book line up by commissioning an artist named Henry Fletcher to create a knockoff of their own established success and help establish the new genre of the “white jungle goddess”: Fantomah. 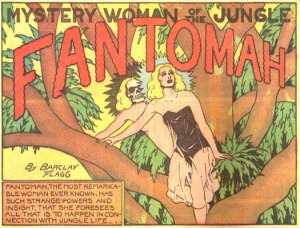 When Fantomah was created it was eventually revealed that she was a former Egyptian relic who was endowed with the power of the gods i.e anything the creator could think of or whatever was needed for Fantomah to save the day.  What makes her separate from most of her other jungle goddess counterparts is that her body would change whenever she needed to use her powers transforming form a gorgeous blonde to…

a living nightmare.  Basically she was an all powerful avatar of justice and vengeance and boy did she have a lot to do.   Her job was to protect her jungle and all its native inhabitants and over the course of her career she faced down evil miners, explorers, and mad scientists.  She wasn’t afraid to deal out some harsh justice as well.  There was one instance where an evil scientist attempts to create an army of super soldier gorillas and Fantomah decides the best course of action is to take the scientist and feed him to his own creation.

She was the first female in comic books to have a dual identity, supernatural powers, and she was created to expressly fight against evil.  These are all the hallmarks of a modern superhero and Fantomah was the first.

Before we go any further, let’s address the pale elephant in the room.  Fantomah: the great protector of the jungle and friend to all the animals and natives is white which can be viewed by many, including myself, to be racist as hell.  The sad reality is that this was the standard operating procedure at the time and this sort of casual racism was the order of the day for pop culture heroes, especially exotic ones like Tarzan or Fantomah.  Personally, I don’t like it and I’m sure a lot of others don’t like it, but it was the way things were back then and we can use examples like this to appreciate just how far we’ve come and as a lesson on what NOT to do with our characters. 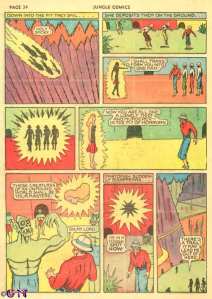 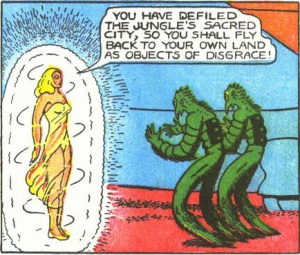 Fantomah was designed from the start to be a cheap and disposable character designed to fill out the pages of other comic book hero books and sadly she faded into obscurity.  She was eventually re purposed in later appearances to share more similarities with her more popular unpowered counterpart Sheena

But sadly she would eventually fade into pop culture obscurity.

Still, Fantomah was the first lady in comic books to fight evil while having a dual identity and superpowers which makes her the very first female super heroine.